In your previous column, (Obligated to D&I), you told a female engineer “you might be the one who can point out why a proposed new feature might affect women and non-binary people in a negative way.” This is me.

I’m one of only 3 women on the engineering team at my startup. Recently, we released a new feature with copy that made some assumptions about users’ gender. This was a pretty bad mistake, inexcusable in this day and age, and a lot of people were upset with us.

I wasn’t even on the team that worked on the feature, but I still feel a bit responsible. Maybe if I’d been given a heads up about the problem first, I would have raised a flag. But at the same time, I don’t know how my concerns would have been received by the team. I’m also not sure how I feel about being one of the few women possibly having look out for things like this.

It was a pretty bad mistake, but no one on the team is directly addressing it. We’ve been kind of talking around it. How do I bring up these issues without necessarily being expected to do that going forward?

I’ve often felt the same sense of responsibility for everything the company does regardless of whether I was actively involved or not. But I've come to recognize that I, alone, am not responsible for an entire company’s actions. You aren't reponsible for what other teams produce either. It’s also not your job to make sure every new feature is “Woman Approved.”

Feeling Responsible, I think the issue here is a systemic one. It seems like the fact that the team’s product development process failed is not getting acknowledged. Good process ensures that people from various functions and expertise are consulted, so mistakes can be caught before they reach your users. And to do that, there needs to be an environment where everyone can feel comfortable raising concerns.

We all contribute to creating that environment, but ultimately, it’s the management that sets the tone. Here’s a story that might highlight the importance of that!

Back in 2014, when my previous startup was around 10 people, we faced a small yet significant product decision. In the recruiting software we were building, users could decide not to move forward with a candidate by “archiving” them. The product then suggests some standard reasons like “Underqualified,” “Location,” “Withdrew,” etc. One of these default categories, “Culture Fit,” was the topic of the debate.

The founders convened the entire company to discuss the decision to potentially remove Culture Fit from the default list. They recognized that the right answer for the company would come after a discussion with the broader team, not just the engineers who would actually make the change.

In this debate, I was pro-removal of Culture Fit, along with a couple of others. I was concerned that Culture Fit is waaaayy too vague and can enable biased hiring – by providing an easy excuse to reject underrepresented minorities (URMs). Additionally, I felt strongly that we had a responsibility to advocate for inclusivity and good hiring, even if that might meant going against some customers’ wishes. However, others argued that we serve our customers the best by giving them what they want, and our metrics showed frequent usage of this category.

I remember being incredibly nervous throughout the conversation, because I was one of only two women in the room, and some of the people I disagreed with were the company’s founders. But everyone was deliberate in making sure even dissenting voices could be heard. When someone accidentally spoke over me, my team encourage me to repeat my point. In the end, we decided to nix Culture Fit from the product’s default settings.

This might seem “duh” because arguments against Culture Fit have become more widespread. But that wasn’t the case in 2014, and we weren’t confident about the decision then. In fact, my startup was ahead of the curve.

But the point of this story I want to emphasize isn’t whether we got the answer “right” – I was more amazed to find myself in a culture that wanted URMs and employees not part of the C-suite to actively voice their concerns (this is the definition of psychological safety). It sounds simple, but I’m pretty sure we’ve all struggled to feel heard at work at least once.

This is what I mean by creating an inclusive workplace, where: 1) there’s space to have the conversations 2) people feel empowered to speak up, and 3) people actually listen. It takes the whole team, but can be especially difficult for URMs, which is why leaders need to step up.


So, back to you, Feeling Responsible.

It sounds like this is a learning opportunity for the company, and I encourage you to frame it as a broader process issue, not just Feeling Responsible’s Problem.

First, talk it out 1:1 with someone. This could either be someone in a position of authority (e.g. your manager) or someone you simply feel safe opening up to (e.g. male colleague who can back you up, either by amplifying your voice or even speaking on your behalf). As honest as you can be, explain how you feel and how you’d like to see improvements emerge from this incident.

Ideally, you can help the leaders see the core reasons why this mistake happened, as well as the potential value of having more voices invited into conversations. You could share articles, suggest a retrospective, and host a book club for Originals by Adam Grant.

Once you’ve done your part in helping the team see how this incident was actually about the broader product development process, then you can choose your level of involvement. And process problems take time to figure out how it will work. So it will be up to you to figure out the right personal balance of helping the team work towards meaningful solutions, while not feeling overly responsible, especially as someone from a URM background.

As we’ve said it before in this column, you are NOT obligated to take on D&I, because your job is to be an engineer, not a female engineer. And we all should remind each other that more often. That way, what we all want will become more of a reality – and that’s to build great products and companies with the best people in the right environment.

Good luck, Feeling Responsible – and thanks for the question. 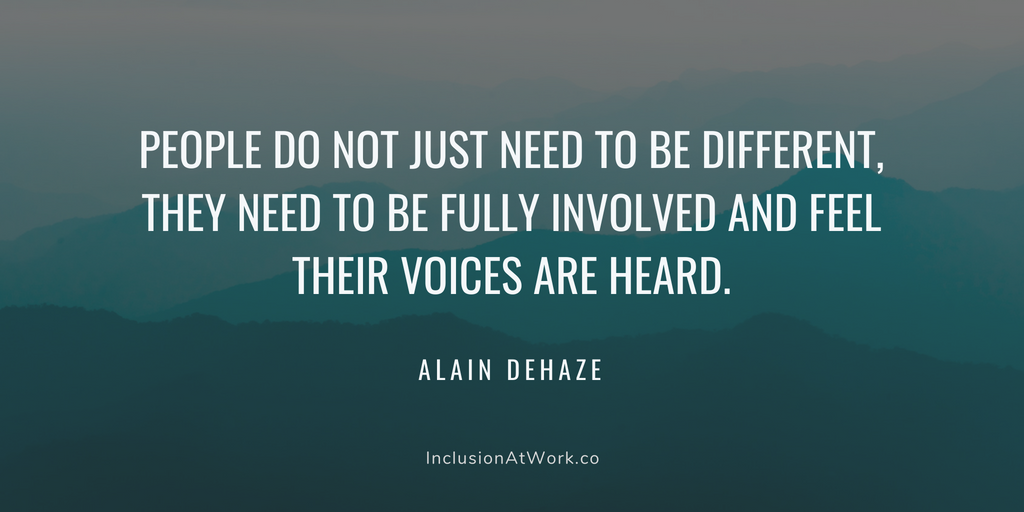