We’re taking a bit of a departure from the usual advice column format this week, with a Roundtable that brings in a few more voices to Inclusion At Work! You can subscribe to weekly posts here.

A while ago, I heard a simple, but really useful explanation for why racism persists. Racism – along with many other -isms – continues to exist because it’s built into our society and culture. We’re biased because bias is in the air we breathe. So, fighting biases requires an active commitment, and thinking we can choose “neutral” means siding against equity.

One powerful way to take an active stance is allyship. The more we see ourselves as allies, the more we’re empowered to stand for what’s right.

I get asked a lot, “How can I be a better ally?” There are a lot of ways – calling out, calling in, actively including others, dismantling biased systems, being willing to give up your own power, etc. This may seem like a lot – but allyship is a skill like any other, where you start with small, and gradually build up confidence to tackle the big.

To give you some day-to-day examples of allyship at work, I’ve asked some friends to contribute to this post. Here are 4 stories of someone using their voice to call something out, and the outsized impact of seemingly small actions.

1. Sales Manager at startup of 150 in San Francisco

“My startup is hosting our first customer conference this fall. When we unveiled the event page, all the speakers were men. It was really disappointing and frustrating because it seemed like SUCH an obvious oversight (it's 2018!). But as one of the women who's been working on D&I informally for a long time, I honestly felt too tired to be the one to bring it up, and didn't even want to have the mental debate about how to best do it. Luckily, one of my coworkers quickly raised a flag, saying this wasn't acceptable. Once he brought it up, other members of the team agreed. The page was taken down until we finished confirming the rest of the speakers. The final slate ended up being far more diverse and something the whole team was more proud of.”

2. Recruiter at a HR tech startup

“Awhile back, a couple people in my office made some off-hand remarks about not wanting to go to Oakland for a meetup "because I don't want to get shot." It would have been so easy to brush it aside, but the next day, one of the (white) engineers called it out as unacceptable. "I understand that it might not be the intention, but comments like that are racist. You're essentially saying you're afraid to go into a predominantly black area because you think black people commit crimes. It would be similarly offensive to joke about going to the Castro and catching AIDS." The way he stood up and called it out firmly led to a good discussion in the team. The ones who made the jokes made a sincere apology, and it was actually a really great learning moment for the entire team.”

"My team hosted an after-hours game night, and in attendance were mostly male engineers. One of them made a sexist joke which made me really uncomfortable as one of the few women present. I don’t remember the exact joke, but I remember feeling like I wanted to leave right then. Thankfully, another senior male engineer simply and firmly responded, "That's not funny." That was all he had to do. And others contributed to the situation by not laughing and changing the subject. By shutting down the joke, my colleague set the norm for our game nights that jokes like that are not okay. I know that it something similar happens in future game nights, my team would have my back.”

4. HR at an internationally-distributed startup of 250

“In Slack, one of my female engineer colleagues asked that we use inclusive language and stop referring to the technical team as “guys” because she felt excluded by the term. Some of the men were quick to make the typical excuses, “but I thought ‘guys’ was gender-neutral” "well, it’s technically ok when it’s informal," and so on, with engineers citing different dictionary definitions to argue their point. Then an ally stepped in:

“Wait, is a bunch of dudes explaining to a woman that she should feel included when she’s explicitly said it makes her feel excluded? Come on everyone, we’re better than that.”

Then a VP jumped in: “[The female engineer] is a far better authority on whether a particular word is inclusive of her than any one dictionary can ever be. Please stop arguing semantics and listen to what she’s saying. You do not get to decide how someone else feels about the words you use. All you get to do is be mindful and respectful of the people around you.”

Once these two people gave their firm responses, the tone of the conversation changed immediately. People let go of their debates, came up with alternatives for ‘guys’ and apologized, which was gracefully accepted by the female engineer.” 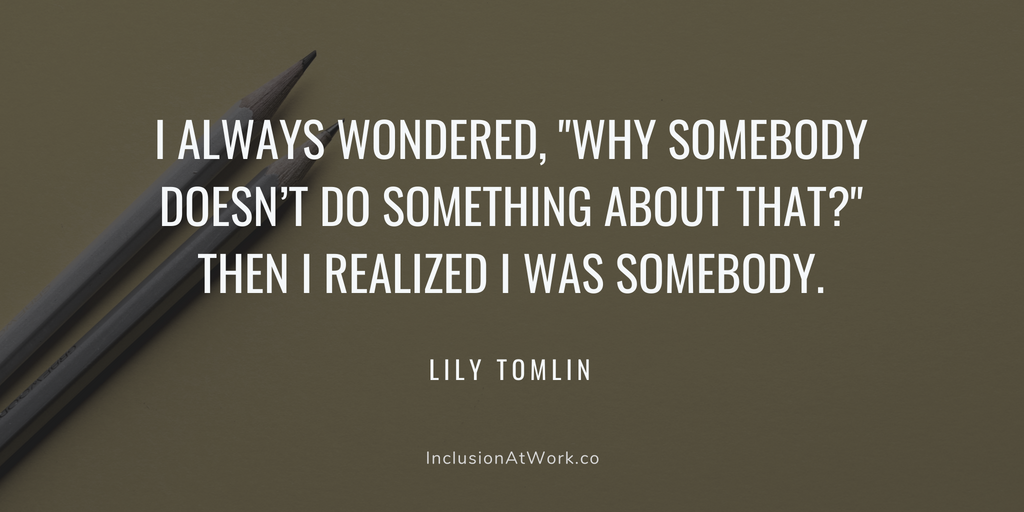 These stories might seem innocuous, but this is what allyship looks like in the day-to-day. These call outs might not lead to awards or viral Tweet threads, but they do get noticed and remembered, especially by those you stand up for.

So here's one potential area of focus if you want to be a better ally. Challenge yourself to get comfortable with key phrases such as, “We’re better than that,” “That’s not funny,” “We don’t do that here,” “Comments like that are racist,” and more. Simple, but firm.

If you aren’t yet confident enough to say it out loud, that’s ok – you can also pose questions. That can be just as impactful. And remember that calling out is just one of many ways to be an ally – we'll cover other areas in future posts.

No matter who you are, you’d be surprised the potential impact of your voice. Let's all get to practice.

Thank you to the contributors for sharing your stories, you know who you are! 😄