I’m an engineer considering a career switch to Diversity & Inclusion. As a woman in a technical field, I’ve seen my fair share of BS. But compared to uber-ignorant founders and tech bros that were previously the default, my current team is way more open to diversity. I co-lead an ERG [Employee Resource Group] and help out on hiring but it doesn’t feel like enough.

My startup doesn’t have anyone in a D&I role yet, and I’m thinking about making a case for it. I’m not sure we’ll take D&I seriously otherwise. Or if my team isn’t supportive, maybe I can apply to other companies for a D&I job. How do I make this decision?

Since career decisions are so individualized and contextual, please get many friends and mentors’ perspectives as well. Any career switch in general entails risk, so it’s worth taking the time for a careful consideration.

Even though this is one of the topics I get most frequently asked about, I wasn’t sure whether I should pick your letter for this column. My honest answer might be a bit of an unpopular opinion, because I think the D&I role is commonly misunderstood and romanticized at tech startups.

So here's the real talk on the growing trend, with the hopes it helps you make an informed decision!

In the last few years, Diversity & Inclusion roles in tech have become very popular. And to be clear, D&I roles can be impactful and fulfilling. I know many D&I professionals who are doing great work and leading change. But the role's effectiveness is not a given, and currently, I don't think it's the right strategy for most tech companies considering it (and for context, my work skews toward startups w/ <1000 people). Figuring out the D&I function as an industry will take time, and we can't just count on the passion and capabilities of individual advocates like you.

The biggest thing to keep in mind is that highly-visible D&I positions are far from the only way to make an impact. So here are some perspectives to consider:

1. Many roles are not set up for success.

Ideally, D&I roles would be clearly thought-out, scoped, and resourced, with built-in accountability checks, as one could reasonably expect for any business function. But too many D&I roles are merely deflections, a way for leaders to outsource the responsibility by assigning it to someone else.

This means that too often, CEOs are looking a figurehead. Consequently, a lot of D&I professionals stepping into their new roles, are then surprised at the lack of resourcing and support available. This, unsurprisingly, leads to relatively high turnover.

This isn’t about blaming the individuals when the role doesn't work out – rather, it’s the broader organization and industry that’s failing. In response to the growing movement, too many CEOs and executive teams are putting up human shields – especially women and people of color. They’re the ones that take risks with their careers, and CEOs get to throw up their hands and say, “well, I tried” when things go south. The alternative is recognizing that D&I work is every leader’s job, as it’s simply part of building a great company.

"Expecting underrepresented minorities [URMs] to do more diversity work reinforces the very disparity that it is supposed to remedy." -Bukky Adebayo, "Obligated to D&I"

The nature of corporate D&I means that very little of the work is actually visible – which is usually the case for culture work in general.

The truth is, for every D&I “win,” there are many more persisting challenges and never-ending new obstacles. The stuff of the puffed-up press releases and splashy websites is merely the tip of the iceberg. A large part of the work is invisible, especially since we’re dealing with systemic changes – not only how companies work in general, but dismantling biases that are deeply integrated into our society. We're talking about a ridiculously hard job that requires a ton of compromise and energy every day.

There are no standard qualifications for a D&I Head because each job is unique and contextual. And the job's responsibilities cover exceptional breadth. Ask a D&I pro about their days and they’ll tell you each one is so different! From crafting and executing on a company-wide strategy, to getting in the trenches with HR/legal, evaluating management practices and leading culture change, to engaging in persuasive communication directly with the C-Suite, dealing with the press, etc. Oh, and becoming the company therapist!

Often, the expectation is to do it all without the guidance of an experienced leader. It’s really hard for someone to learn everything at once: Recruiting, HR, Organizational Development, Management, Communications, etc. – especially with the high expectations and scrutiny that comes with D&I.

But there's more than organizational skills. Stepping into a D&I leadership role entails a huge responsibility. To do it well, cultural competency is a requirement. Individuals must have made significance progress in unpacking their own biases and privilege. I'm not saying you need to be fully "woke," never making any mistakes – but if you jump in too early, without having done the work and understanding the challenge – we might end up inadvertently causing more harm to the marginalized groups we're supposed to be serving.

“I worry about the growing popularity of the D&I role,” a prominent investor and diversity advocate told me once. “Because at some point, there will be another downturn period, and these jobs will be first cut.” D&I in tech startups is a giant experiment, and just because it’s in vogue now, doesn’t mean it will be in 5 years.

On a personal note, this is a big reason why I’ve turned down Head of D&I offers, including at my last startup. While D&I is a large part of my work and always will be, I personally don’t see myself having a “career” in it. That’s not to diminish the importance of this work or how much I care about it (obviously! This column hopefully is proof of that). It’s just that we shouldn’t over-rely on one strategy because it happens to be most visible and appealing.

With this kind of uncertainty, it’s important that you prioritize the continued development of your transferable skills. This is especially important for URMs to avoid getting pigeon-holed in the future. You can also consider creative experiments, such as Culture Amp’s decision to make its D&I role an annual rotation.


I say all this, not trying to be doom and gloom. Not at all! I’m really heartened by the growing momentum for D&I. Each career decision is so important, I just want to help provide balance of perspectives – especially when it often feels like "real talk” about D&I is reserved for 1:1s. And I'd like to make more insider information more accessible, especially when I've seen so many people go through a long, painful process to come to these realizations.

Debating A Switch, it sounds like your eyes are open to the current moment of change, and that’s wonderful. But I also think you’re looking for permission to go out there and start leading. There’s a reassurance given by job titles, that helps us feel like we’re “allowed” to work on something. I get it. D&I can be impossibly intimidating, when the problems are so big and pervasive.

But getting in action is what gives you confidence, not the other way around. I’ve been long inspired by so many engineer advocates without "D&I" in their job titles. There are so many, but just to name a few: Rachel Thomas, Marco Rogers, Erica Baker, Cate Huston, Leigh Honeywell, Danilo Campos, Leslie Miley, Amy Nguyen, Camille Fournier, Lara Hogan, etc. You too, have in front of you, many paths to be an advocate and a badass engineer. And, not or.

You also say in your letter that your current efforts don’t feel like they’re enough – and maybe it never will. That’s ok, because that’s the nature of social justice work. But if you’re itching to make a larger impact in D&I - especially in a startup! - you don’t need anyone’s permission, nor a title change to start.

There's a lot of potential ahead in our industry. Building upon the progress of previous generations, I'm personally seeing a lot of encouraging signs and creative experimentation for D&I, especially at earlier-stage startups.

I know you can be part of that and that you don’t need a title to make it happen. It’s no single person’s job to fix D&I, but one person can make a difference. 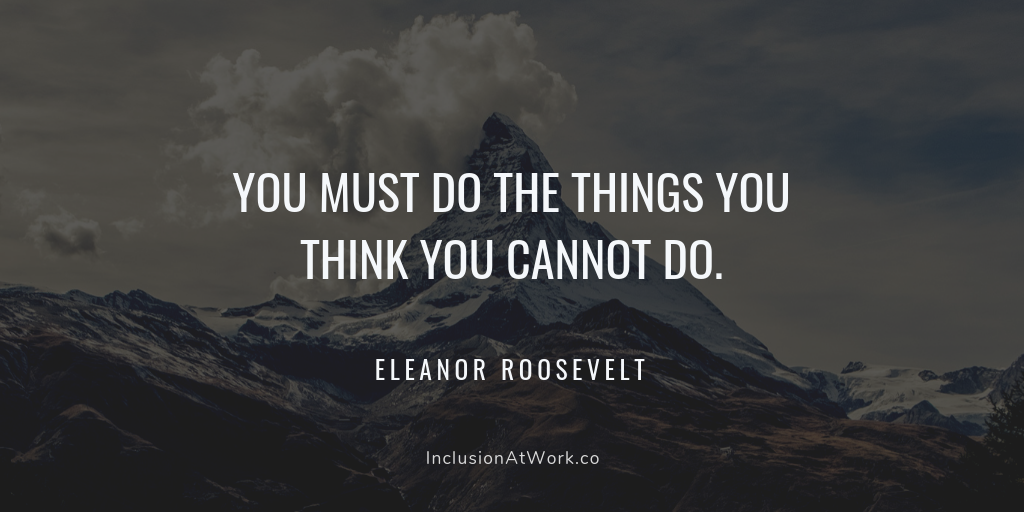 👉 Want to learn about how to champion D&I, with or without a title? Check out our Diversity & Inclusion online course, created in partnership with Udemy!

Thanks to Bukky Adebayo for the usual word wrangling and moral support!
Image by Ian Schneider via Unsplash