I’m stuck. My company’s leadership is nowhere near ready to prioritize D&I. We’re 50 people and it’s somewhat diverse, we’ve been lucky because one of the founders is a woman. Despite that, the leadership team is not willing to invest in more D&I efforts. The lack of urgency or substantive progress is starting to get pretty frustrating.

I’m a cisgender white man, but I believe diversity is really important. I don’t know how to make it more of a company priority. I’ve only been at this job for a few months, and I’m also one of the youngest people. It feels like I’m running into walls every time I bring up ideas for potential initiatives we could take on, but it’s all really hard to do without leadership support. Any ideas?

Dear The Rogue One,

In an ideal world, every D&I advocate would be fully backed by the senior leaders of their company, which would bring the appropriate support and resources to tackle big challenges. But that’s often not the case, and when it comes to making progress, we all start from where we are.

In D&I, it’s often hard to know where that starting point is. So we look to checklists and other companies are doing to helps us feel like we’re doing it “correctly.” But this approach tends to emphasize splashy, highly-visible initiatives such as diversity reports, throwing events, or writing a big check to sponsor a conference. These are certainly popular approaches but not necessarily effective. Plus, they may lead to some unrealistic expectations about the day-to-day approach to building inclusion, which is more relevant for smaller startups.

The truth is, when D&I starts out organically (led by individuals, rather than C-suite), things look a little different than you might expect. So, my answer here is focused not on how to convince your leadership team to prioritize D&I – that’s a separate, much longer conversation – but ways you can start making progress today.

The Rogue One, I want you to know that D&I on a much smaller scale can be impactful too. Sometimes even more meaningful for the lived experiences of people around you. Because a lot of the “invisible work” of D&I is simply being mindful about the culture, paying attention to what could be improved, and then just doing it! Here’s an example of that from my last startup:

When this note came in from my co-founder of the D&I Taskforce, we ordered the band-aids right away. Didn’t make it a big deal or anything, just added it the office First Aid Kit.

Of course, it’s not like darker-shade band-aids can magically solve all the challenges that people of color face at most workplaces. But it does start with the little things, like being pleasantly surprised next time you go to treat a paper cut. This is one of many, many small ways we can signal to teammates with darker skin that we’re thinking about the small ways they are not served by mainstream products. Maybe, just maybe, a first aid kit can bring the briefest sense of relief, of feeling seen, of being reminded, “someone thought of me. Because I belong here.”

Similarly, for women job seekers in tech, feminine products in the bathrooms have become a common signal abou the potential inclusivity of that particular workplace. If a relatively small team has thoughtfully stocked the same way you would with any employee supply closet or snack bar, it’s an indicator (of many possibilities) for startup maybe being more intentional about supporting women.

This isn’t to say we just need to order band-aids and tampons and be done with it – that’s well, putting the band-aid on the problem! Instead, it’s about building the muscle of mindfulness about being inclusive in things that have a small but disparate impact. It's easy to underestimate the power of small, human touches on a workplace. And this also reaches the majority groups, who may realize, “Oh, I would have never thought of that.”

As I frequently remind folks in my advising conversations, D&I is less “checklist” and more “mindset,” one that’s about committing to continual progress. I promise you, The Rogue One, it’s not like if you haven’t done the popular XYZ D&I Initiative yet, you’re automatically failing. Instead, the most effective D&I work comes from authenticity, from focusing on the needs of your team and its people, while keeping intersectionality in mind. 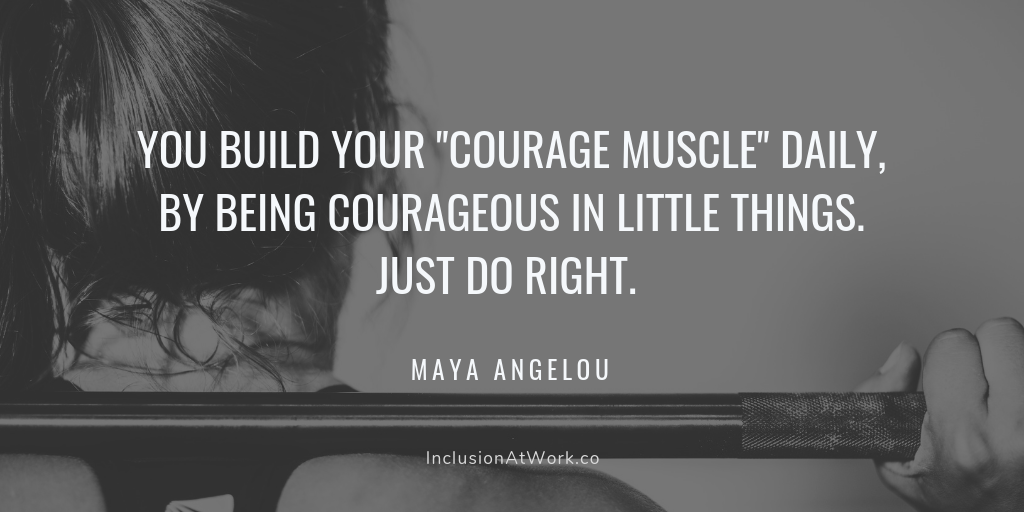 Maybe band-aids and tampons don’t sound very exciting. A lot of D&I work really isn’t. That's ok, because we all need time to develop confidence, instead of reacting to only fears or "should"s.

Remember that substantive progress takes a long time. The stuff of press releases, viral blog posts, photogenic events is usually the tip of the iceberg. The actual majority of the work – all the little things – don’t usually get written about or celebrated. But they mean something, especially to people from marginalized groups.

Being realistic about what you can achieve as a grassroots D&I advocate might have you working on the small things for awhile, but that’s ok. They help you build advocacy muscles – your own and your team’s – so you can go on to tackle bigger challenges, like ensuring equity in pay/promotions, or re-designing the technical interview process. And over time, you can invite more allies to join, by showing them the work starts with baby steps, which don’t require titles, budgets, or formal authority. This is how you build momentum.

Lastly, The Rogue One, none of this means you have to do everything by yourself either. Even if the leadership team isn’t bought in, I bet you have allies in other corners of the company. Amplify your impact by finding people who care. This is especially important for cisgender white male allies to be mindful of. By partnering with others and inviting them to check your ally efforts, you can avoid co-opting the work of marginalized groups and the trappings of the “white savior.”

But overall, I’m really glad you’re asking these questions. Some of the most effective D&I programs have been employee-led. I’ve seen over and over again how grassroots movement within companies ended up opening the eyes of senior leaders. Maybe that will happen for your leadership team, maybe it won’t. I’ll cover earning that buy-in in a future post – it’s a frequently asked question here at I@W – but that’s just one part of the equation. We can also focus on supporting the people who actually need our support.

Indeed, as you say, this is about doing the right thing. Sounds like you just have to start. 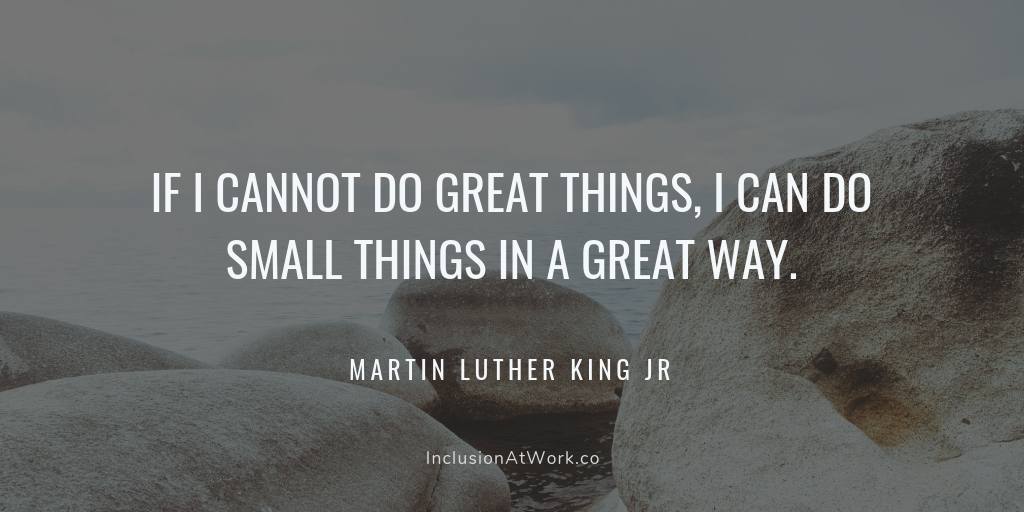 For inspiration, check out my previous post, “50+ Ideas for Cultivating Diversity and Inclusion in the Workplace You Can Start Today”!

👉 And check out our Diversity & Inclusion online course, created in partnership with Udemy!

Thanks to my editor Bukky Adebayo, who helps me build my courage muscle.
Image from Pexels