Submit your own question about Diversity & Inclusion here and subscribe to weekly posts here. This week, my editor Bukky Adebayo is back as a guest author! ✨ – Jen

I’m the only woman on my team, which means pretty much every time a candidate from an underrepresented background is being considered, I’m on the interview panel. My company recently gave an offer to a woman, who’s also a racial minority. She then requested to meet with me 1:1 for coffee. At our meeting, she told me that she’d been burned at her previous startup and asked for my honest thoughts on my company.

I didn’t really know what to tell her and how much. Of course my startup isn’t perfect, but how much are you supposed to really open up with a candidate? Just before the meeting, my team reminded me how important it is that we hire her and told me to “close” her. I had only prepared selling points, so I ended up sharing too much negative information about the team, and I just found out she declined the offer. She didn’t give a specific reason why, but now I feel like I majorly screwed up.

How should I approach something like this in the future?

I wish I had a simple answer for you, but unfortunately, there is no one right approach for situations like this. Each time a candidate asks you for your opinion, you get to decide how you want to answer. And with this woman, it sounds like you told the truth. By doing that you chose to look out for someone who asked for your help. Don’t beat yourself up for that. Maybe your answer affected her decision to decline the offer, or maybe it didn’t. You may never know, and that’s ok.

The reality is, as the only woman on your team, you bear a disproportionate responsibility to represent your company, especially with candidates from underrepresented backgrounds. And that puts you in a hard place – in having to choose between dutifully selling your company or speaking with honesty.

I, along with many others, have also felt the pressure to speak positively about certain experiences, regardless of the truth. So in contrast to your situation, I want to share with you a story about the time I gave into the pressure and ended up regretting it.

At the small college I attended, I was the only Black woman on the entire campus, including all students, staff, and faculty. Because of this, I was the Black female mascot. My photo was featured prominently on the website and every brochure. I dutifully parroted the talking points from Admissions – about the involved and supportive faculty, and the collaborative project-based curriculum.

The positives were certainly true, but the picture was incomplete. There was no room in my sales pitch to say how lonely and isolated I constantly felt from being the “only one.”And by junior year, I got tired of the charade – the distance between what the school wanted me to say vs. my reality. So, I stopped giving tours and speaking to prospective students.

But one day between classes, I was stopped by parents of a Black prospective student, who asked, “How do you like it here?” And I knew what they were really asking: “Will our daughter be ok in this predominantly white space?”

I saw in their eyes the same anxiety that many parents have, but I could tell they were hoping that I could reassure them. But I’ve never been good at delivering bad news, so unlike you, I reverted back into my old talking points.

I couldn’t tell them as the Only One, I found myself constantly having to explain and justify my existence to classmates, for many of whom I was the first Black person they knew. I couldn’t say how exhausting and infuriating it was when I was told, “don’t be such an angry black woman.” Or the time when another classmate refused to call me by name for an entire night, calling me “the black girl,” making everyone around uncomfortable.

I didn’t know how to tell them that most of the “adults” were ill-prepared to mentor and support me. So I didn’t bring up the professor who said that it was my obligation to educate my classmates on race issues, putting on pressure that no other student was subjected to. And I stayed silent about the career counselor who suggested that I wasn’t cut out for startups, when I asked for advice about a hiring manager who made a racist joke at my expense during an interview.

With these stories - and many more - swirling around in my head, how could I tell perfect strangers how I really felt? So I lied, and let them think that the school had my Black endorsement.

The next semester, she started as a first year. And as she visibly struggled, I felt a deep sense of guilt. I couldn’t shake the feeling of responsibility for this classmate, on top of my own existing struggles. I’ve re-imagined that conversation with her parents many times, wishing things turned out differently. And it took me a long time – years after graduation, actually – to realize that as a student, it wasn’t my responsibility to take on this kind of burden.

So back to you, My Stupid Mouth. I totally understand that it feels easier to fall in line and do whatever it takes to close candidates. By sticking to talking points, you don’t have to worry about being emotionally vulnerable, or making a major misstep that will get you in “trouble” with the team. I just want you to know that doing that comes with different consequences – something I had to learn the hard way.

But the point is, we’ll never know. That’s why there’s no easy answer to this question and similar scenarios you will undoubtedly face in the future. Context is everything. And so, there is simply taking each moment as it comes. Because you are a human with lived experiences, not a diversity mascot. Going forward, the only thing you can do what feels authentic, letting other people make their own choices, and learning from each scenario. That’s the best we can expect out of each other in hard situations like this. 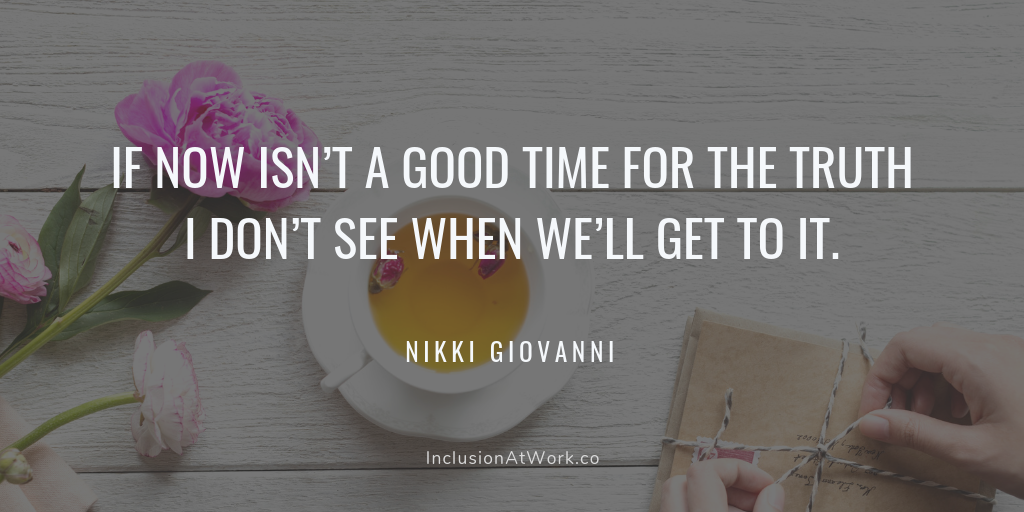 Lastly, My Stupid Mouth, I want to call out what I found most interesting in your letter. It sounds like you think you think your truth scared this candidate away. If that’s the case, I can’t help but wonder why those experiences haven’t scared you away.

Your didn’t provide details – so I’m not necessarily advocating for you to quit today, just that it’s worth thinking about why you are still there. I’m sure there are plenty of reasons – maybe it’s your work friends. Or maybe it’s practical factors like a good salary or great benefits.

Upon honest reflection, you can get anchored in those personal reasons, you can communicate them alongside your real experience without the guilt. I have a WoC manager friend who recruits (very effectively) at her large tech company by saying, “ABC factors at this company aren’t great, the criticism around X we’ve received is fair, and yes, the Y team is garbage. But here are all the reasons my team is doing phenomenal work, and here are the ways I’m building an inclusive, supportive culture, for the Z tradeoffs that I think are very much worth it.” No job is perfect, so there is no reason to pretend they are. Instead, an honest walk-through about tradeoffs is often far more compelling than an overly positive, and fake pitch.

However, at one point you might find that the reasons to stay don’t hold up anymore. In which case, it’s time to start searching for a new gig, where you’re less likely to feel pressured as a D&I mascot. That’s what I wish for you, My Stupid Mouth – a workplace where you can authentically and enthusiastically advocate for others to join. Not because it will be perfect, but because you can be a team player and tell your truth at the same time.

About the author: Bukky Adebayo (@bukkyadebayo, pronounced “BOO-ki”) is a product manager and technology policymaker. She currently serves as a Congressional Innovation Fellow for the U.S. Senate, advising legislators on technology policy, with a focus on on digital consumer protection. Previously, she was a PM at several early stage startups: Bedrock Analytics, General Assembly, and Hopper.

She’ll soon be back in Bay Area – Send her your leads for Product Manager / Chief of Staff openings!